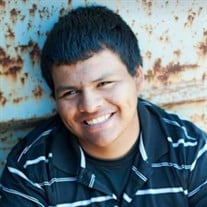 Memorial funeral services for Brandon Lee Contreras age 25 of Lamesa, Texas will be held at 11:00 a.m. Thursday, June 13, 2019 at the Faith Temple Church of Lamesa with Pastor Mike Rodriguez and Pastor Elvis Rodriguez officiating. The burial committal service will follow to the Dawson County Cemetery. Funeral arrangements are under the care and direction of Gonzales Funeral Home of Lamesa, Texas. Visitation will be held on Tuesday, June 11 and Wednesday, June 12 at Gonzales Funeral Home with Inspirational Services at 7:00 p.m. Brandon passed away on Wednesday, May 29, 2019 in Ector County, Texas. He was born on August 6, 1993 in Lubbock, Texas. He was preceded in death by his father, Gerardo Esequiel Contreras; his grandfather, Quintin Contreras; his grandmother, Margarita Contreras: his grandfather, Manuel Rodriguez; his aunt, Consuelo Contreras. Brandon liked associating with people, going fishing, playing Online games, and having a good time with his family and friends. Brandon was employed by the US Silica-Lamesa Plant. Brandon is survived by his mother, Michelle Mendoza and his step-father, Jose Mendoza of Lamesa, Texas; his brothers, Jerry Contreras and Brandi (sister-in-law), Jonathan Contreras, all of Midland, Texas, Justin Contreras, and Aaron Contreras and Desiree Villegas (sister-in-law), all of Welch, Texas; his sister, Xena Contreras and Josh Walton (brother-in-law) of Welch, Texas; his step-sister, Savannah Mendoza of Lamesa, Texas; his nephews, Jeremiah Lee Contreras, Justin Kayce Walton, both of Welch, Texas, and Maddox Contreras of Midland, Texas; numerous relatives and friends.

The family of BRANDON LEE CONTRERAS created this Life Tributes page to make it easy to share your memories.

Send flowers to the CONTRERAS family.