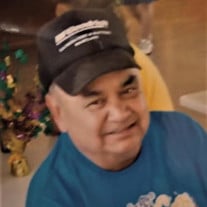 Catholic graveside funeral services for Benny Landin age 78 of Lamesa, TX. will be held at 10:00 a.m. on Thursday, February 4, 2021 at the Dawson County Cemetery with Deacon Daniel Valenzuela officiating. Funeral arrangements are under the care and direction of Gonzales Funeral Home. Due to the area Covid-19 situations and for the safety of the family and the community face masks and social distancing are required at the funeral home and cemetery. Viewing and visitation will be held on Tuesday, February 2, 2021 from 2:00 p.m. until 9:00 p.m. and on Wednesday, February 3, 2021 from 9:00 a.m. until 9:00 p.m. at Gonzales Funeral Home with a Rosary prayer service at 7:00 p.m. on Wednesday. Mr. Benny “Bebo” Landin, son of the late Jose and Dominga Landin, was born April 5, 1942 in Seguin, Texas. He spent a lifetime nurturing his faith in god, as a dedicated member of St Margret Mary’s Catholic Church. He served his congregation as an altar boy, eucharistic minister, and as a volunteer as a church custodian. At the tender age of 19, he was fortunate to find an uncommon and eternal love with Felicia Salazar. The romance progressed into holy matrimony in May of 1961. This union was blessed—and at times cursed—by five boys. Benny worked as the Klondike High School custodian, before Felicia partnered with him to work side-by-side. He supported the lives of his sons, picking them up when they fell, cheering them on throughout their boyhood exploits in football, basketball, and on the track field at Klondike High School; funding their educations, as a best friend, role model and mentor through adulthood and into middle age; and finally, in death. To quote Augustus McCrae from one of his favorite Westerns: “Yes, sir, he died fine, didn’t he.” Like his wife, Felicia, who passed before him, Benny spent years of empathetic and compassion service to the many who knew him. Benny loved to eat—good thing he married someone who could cook. He loved to play the slots in Vegas and was a little jealous when his wife hit a $5000 jackpot. He could play the guitar, but it usually took 3 to 4 beers before he could get a tune out of it. He enjoyed old Westerns—probably saw Silverado over 1000 times, the last 995 really annoyed his wife. He had one of those smiles, the kind that spread across his face and into the hearts of all within sight of it. He had lots of caps, even before he lost most of his hair. In recent years, what he enjoyed most was sitting in parks and watching his grandchildren, though he was often confused by the haircuts his grandson’s sported: Ashton looked like Lord Forquaad from Shriek and you couldn’t tell what Caleb looked like because his hair swept over his eyes and touched his chin. However, in his eyes his granddaughters could do wrong, even though Baylee and Amanda had a rivalry for his affection—Baylee was particularly skilled at manipulating the situation. Hairstyles and rivalries aside, all his grandchildren are blessed with that same smile. His Christian life will forever remain in the lives of all who knew and loved him. He quietly departed this life on Saturday, January 30, 2021 at Medical Arts Hospital in Lamesa, Texas. Benny was born on April 5, 1942 in Seguin, TX. He is now with Felicia, where he has always belonged. He was preceded in death by his parents Jose and Dominga, and his eternal love, Felicia. His wonderful life and smile will forever be reflected in the lives of his sons: Joe of Lamesa, Texas, Benny (Tina) of Grand Prairie, Texas, Rick of San Diego, California, Rudy of Grand Prairie, Texas, and Chris (Amanda) of Arlington, Texas; grandchildren: Amanda (Beto) of Arlington, Texas, Ashton (Alexis) of Arlington Texas, Caleb and Baylee of Arlington, Texas; sisters: Josie (Antonio) Aleman of Lubbock, Texas, Janie (Isidro) Ramirez of Lubbock, Texas, JoAnn (Dace) Altman of Lubbock, Texas, Rosemarie (Edward) of Lubbock, Texas, Mary Mosqueda of Lubbock, Texas and Irene of Abilene, Texas; brothers: Jose (Olga) of Lubbock, Texas, Johnny (Gracie) of Lubbock, Texas, Joe Luis (Linda) of Lubbock, Texas, Jesse of Lubbock, Texas; sisters-in-law: Olga (Bush) Davila of Andrews, Texas, Mary (Joe) Ramirez of Brownwood, Texas and Anna (Chris) Hill of Princeton, Texas; and brothers-in-law: Rosendo (Rosa) of Lovington, New Mexico and Raymond (Emma) of Kingsville, Texas.

Catholic graveside funeral services for Benny Landin age 78 of Lamesa, TX. will be held at 10:00 a.m. on Thursday, February 4, 2021 at the Dawson County Cemetery with Deacon Daniel Valenzuela officiating. Funeral arrangements are under the... View Obituary & Service Information

The family of BENNY "Bebo" LANDIN created this Life Tributes page to make it easy to share your memories.

Send flowers to the LANDIN family.