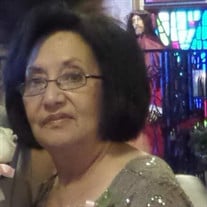 A Catholic funeral mass service will be celebrated for Augustina (Augie) Garza. age 70 of Lamesa, TX., at 10:00 a.m. on Wednesday, November 17, 2021 at St. Margaret Mary Catholic Church with Father Chacko Thadathil officiating. Burial committal will follow to the Dawson Cemetery. Funeral arrangements were under the care and direction of Gonzales Funeral Home. Viewing and visitation will be held on Monday, November 15, 2021, from 2:00 p.m. until 9:00 p.m. and Tuesday, November 16, 2021 from 9:00 a.m. until 9:00 p.m. Rosary prayer services will be held on both nights at 7:00 p.m. at Gonzales Funeral Home Chapel. Augustina passed away on Sunday, November 14, 2021 at home in Lamesa, TX. She was born on May 28, 1951 in Lamesa, TX. Augustina was preceded in death by the Garza Twins; her parents, Ricardo and David Luna; her brothers, Antonio Luna, Sr., Julian Luna, Aploino Luna, Crespin Luna, James Luna; her sisters, Joyce Guzman, Ruby Luna, and Margaret Navarro. Augie grew up in the Sparenburg area. The family moved to Martin County in the early 1960’s. She attended school in Grady. She graduated from Stanton High School. In 1976, the family moved back to Lamesa and she worked at Furr’s Supermarket as a meat wrapper. Augie was a devoted teacher assistant for many years with the Lamesa ISD and a teacher for Lamesa Early Head Start She retired in 2017 to spend more time with her grandchildren. She was a loving mother, a voted grandmother, and exceptional teacher. Anyone that met her was welcomed with a warm genuine smile. She was a die hard Dallas Cowboy fan. Her legacy lives within her kids and grandchildren. Augie is survived by her sons, Jeffrey Garza and wife, Ami of Odessa, TX., and Ray Garza, Jr. and wife, Norma Lamesa, TX.; her daughters, Tina Garza and husband Jose, and Sarah Lozano and husband Chris all of Lamesa, TX.; 14 grandchildren; her brothers, John Luna and wife Gloria of Lamesa, TX., and Domingo Luna and wife Mary of San Antonio, TX.; her sisters, Delfina Luna of Lamesa, TX., and Louisa Martinez and husband Robert of Wylie, TX.; her sister-in-law, Teresa Smith Luna of McKinney, TX.;numerous relatives and friends. Honoring Augie as Pallbearers are, Ernest Luna, David Luna, Jamie Casillas, Rick Casillas, Robert Garza, and Andy Garza.

The family of AUGUSTINA GARZA created this Life Tributes page to make it easy to share your memories.

A Catholic funeral mass service will be celebrated for Augustina...

Send flowers to the GARZA family.