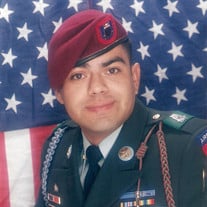 A funeral mass will be celebrated for Armando Delgado Hernandez age 40 of El Paso, TX. and formerly of Lamesa, TX. at 2:00 p.m. Saturday May 4, 2019 at St. Margaret Mary Catholic Church with Father Joseph Kurumbel officiating. Burial Committal service with full US Military funeral honors will follow to the Dawson County Cemetery. Funeral arrangements are under the care and direction of Gonzales Funeral Home of Lamesa, TX. Viewing will be held on Friday, May 3, 2019 with a Rosary prayer service starting at 7:00 p.m. at Gonzales Funeral Home Chapel. Armando passed away on Monday, April 29, 2019 in El Paso, TX. He was born on May 18, 1978 in Lexington, Nebraska. Armando married Mary Rose Lauro on October 31, 2013 in the Philippines. He was preceded in death by his grandfather, Jesus Hernandez; his father, Raul Delgado. Armando served in the US Army earning the rank of E6 Staff Sergeant, Airborne and made it his career until his retirement. He was a combatative instructor. He enjoy working and fixing old cars, racing his classic 1979 Pontiac Trans-Am, love spending time with his family and his pitbulls. Armando is survived by his loving family, his wife, Mary Rose Lauro Hernandez of El Paso, TX.; his mother, Rosa Delgado, his grandmother, Aurora Hernandez, and his sister, Zelda R. Aguirre, all of Lamesa, TX., and his son, Franklin Robbins of Simi, California; numerous relatives and friends.

The family of ARMANDO DELGADO HERNANDEZ created this Life Tributes page to make it easy to share your memories.

A funeral mass will be celebrated for Armando Delgado Hernandez...

Send flowers to the HERNANDEZ family.