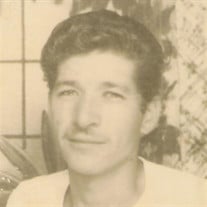 Arrangements are set for a Catholic funeral mass to be celebrated for Amador Padilla, Sr., age 78 of Lamesa, Texas on Wednesday, February 25, 2015 at St. Margaret Mary Catholic Church with Father Joseph Kurumbel officiating. Interment will follow to Dawson County Cemetery at their family plot. Funeral arrangements are under the care and direction of Gonzales Funeral Home of Lamesa, Texas. Visitation and viewing set for Monday and Tuesday with Rosary recited at 7:00 p.m. at Gonzales Funeral Home. Mr. Padilla passed away at his home in Lamesa on Saturday, February 21, 2015. He was born on March 26, 1936 in Santa Fe, New Mexico. Amador married Evangelina Ortiz on February 14, 1955 in Littlefield, Texas. Amador was a mastered-carpenter. He loved to play Bingo and enjoyed spending time with his family and not a day went by without enjoying his cup of coffee. He was preceded in death by his parents, Eduardo and Carolina Padilla; his son, Gilbert Padilla; his sisters, Eloisa Villegas, Lipa Montoya, Lillian Miyahara; his brothers, Freddy Padilla, Eddie Padilla, Jr. Amador is survived by his loving family, his wife, Evangelina Padilla of Lamesa, Texas; his sons, Amador Padilla, Jr. and wife, Rosalinda of Lamesa, Texas and Ben Padilla and wife, Tonya of Lubbock, Texas; his daughters, Carolina Valenzuela and husband, Gume of San Antonio, Texas and Jeanette Padilla of Midland, Texas; his brothers, Danny Padilla and Lupe Padilla, both of Littlefield, Texas; his sisters, Carmen Duran of Littlefield, Texas and Maria De La Cruz of Lubbock, Texas; 9 grandchildren; 9 great-grandchildlren; 1 great-great-grandchild.

The family of Amador Padilla Sr. created this Life Tributes page to make it easy to share your memories.

Arrangements are set for a Catholic funeral mass to be celebrated...

Send flowers to the Padilla family.