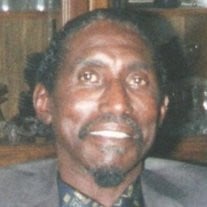 Funeral services for 69 year old, Alvin Andrew Bailey Jenkins, of Lamesa, Texas were set for Friday, August 16, 2013 at St. John's Missionary Baptist Church with Pastor Arvin Medlock, Jr. and Pastor Jerry Gardner, officiating. Eulogy presented by Deacon Harden Jenkins. Burial will follow at Dawson County Cemetery under the direction of Gonzales Funeral Home. Alvin was born on February 16, 1944 in Lamesa, Texas to Ethel Lee Jenkins and Mairon Bailey. He was a long time member of St. John's Missionary Baptist Church. Alvin had his first child, Sherl Lynn when he was a young man. He later married Etta Marie Mitchell and had three more beautiful children. In addition, Alvin had threemore children, Sandy, Andy and Nicole. He loved to cook and share pearls of wisdom with his family. Alvin passed away on Saturday, August 10, 2013 at University Medical Center in Lubbock, Texas. As a young man, he joined the US Military and had the opportunity to travel to Germany, Africa and France while serving his beloved country. He lived in several places throughtout his life but he returned home to Lamesa in 1999 because of his unconditional love for his famlly. He was a history buff that told the best stories ever! Alvin LOVED to dance and you could always catch him on the dance floor shaking his tail feathers. He also became a Master Chef and could cook anything you could think of. Alvin left a trail of happiness wherever he went and touched the life of anyone he met. Alvin is preceded in death by his mother, Ethel Lee Jenkins; his father, Mairon Bailey; his son, Andy Bailey. Alvin is survived by his six children, Sherl Lynn Deary of Atlanta, GA., Tammy Jackson (& Brent) of Lamesa, Texas, Alvin (& Sheila) Bailey of Dallas, Texas, Verline (& Shane) Bailey of Lamesa, Texas, Sandy Bailey of New York, Nicole (& Edwin) Decluette of Duncanville, Texas; his step-children, Quincy, Danette, Tasha, Michael Hawkins of Dallas, Texas; his brother, Hardin (& Paulette) Jenkins of Lamesa, Texas; his aunt Dorothy Huey of Lamesa, Texas; twenty-two grandchildren; twenty great-grandchildren; a host of nieces, nephews, cousins and friends. Whether you knew him by Alvin, "Zook", "Hump", "Blind" or "Chicken Man", he was a great brother, father, uncle, cousin and friend. Alvin will live on forever in our hearts!

The family of Alvin Andrew Bailey Jenkins created this Life Tributes page to make it easy to share your memories.

Send flowers to the Jenkins family.