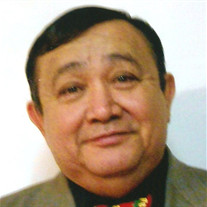 Funeral services with christian burial for ALFREDO ESCOBEDO, age 58 of Lamesa, Texas will be held at 10:00 A.M., on Thursday, May 29, 2014 at the church of Cristo La Rosa in Lamesa, Texas with Pastor Geno Salazar officiating. Burial will follow to the O'donnell Cemetery in O'donnell, Texas. Funeral arrangements are under the care and direction of Gonzales Funeral Home of Lamesa, Texas. An Ispirational Service will be held at 7:00 P.M. on Wednesday, May 28, 2014 at Gonzales Funeral Home Chapel. Alfredo passed away on early Sunday mornng, May 25, 2014 at Convenant Medical Center in Lubbock, Texas. He was born on October 12, 1955 in O'donnell, Texas. Alfredo married Delma Estrada on September 10, 1983 in Welch, Texas. He was preceded in death by his parents, Luis and Juanita Escobedo; his brother, Luis "Crow" Escobedo. Alfredo was a handy-man, loved to go fishing, but mostly he was a "Fisher of Men for the Lord". He loved his family, loved being outside. He attended his beloved church of Templo La Hermosura De Dios. Alfredo's greatest passion was to talk about Jesus his Savior. He was the former and last pastor of the church Templo Ebenezar Santa Pentecostes. Survivors include his loving wife, Delma Escobedo of Lamesa, Texas; his son, Aaron M. Escobedo and daugher-in-law, Joyce J. Escobedo of Grapevine, Texas; his daughters, Tabitha K. Escobedo of Abilene, Texas and Abigail D. Escobedo of Lamesa, Texas; his brothers and sisters, Lorenzo Escobedo and Sally of Tahoka, Texas, Gloria Huerta of Lubbock, Texas, Irene Hernandez and John of San Angelo, Texas, Ida Bosque of Lubbock, Texas, Sara Escobedo of Lubbock, Texas, Dora Roberge and Tim of North Carolina, Gabino Escobedo of Lubbock, Texas, Hilario Escobedo and Becky of Lubbock, Texas; serveral nieces, nephews and a large family of Faith.

Funeral services with christian burial for ALFREDO ESCOBEDO, age 58 of Lamesa, Texas will be held at 10:00 A.M., on Thursday, May 29, 2014 at the church of Cristo La Rosa in Lamesa, Texas with Pastor Geno Salazar officiating. Burial will follow... View Obituary & Service Information

The family of Alfredo Escobedo created this Life Tributes page to make it easy to share your memories.

Send flowers to the Escobedo family.