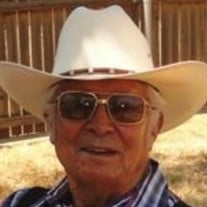 A Catholic funeral mass service for Alfredo Castaneda age 97 of Lamesa, TX. will be held Tuesday, February 11, 2020 at 10:00 a.m. at St. Margaret Mary Catholic Church with Father Jose De Dios Gonzales officiating. Interment will follow to the Dawson County Cemetery. Funeral arrangements are under the care and direction of Gonzales Funeral Home. Viewing will be held on Sunday, February 9, 2020 and Monday, Februar 10, 2020 with a Rosary prayer service on Monday, February 10, 2020 at 7:00 p.m. at Gonzales Funeral Home Chapel. A Rosary prayer service will be held on Monday, February 10, 2020 at 7:00 p.m. at Gonzales Funeral Home Chapel. Alfredo passed away on Saturday, February 8, 2020 in Lamesa. He was born in San Luis Potosi, Mexico on February 5, 1923. Alfredo married Concepcion Gonzalez on February 5, 1955 in Lamesa. He was a farmer, devoted family man, and amazing husband, dad, grandpa, great-grandpa, and friend to all. Alfredo would give you the shirt off his back. Alfredo is preceded in death by his, daughter, his parents, brothers, sisters, stepbrothers, and stepsisters. He is survived by his wife, Concepcion, of 65 years of Lamesa; son, Jesus (Jesse) and wife, Nancy of Brownfield, TX.; daughter, Mary Garza of Lamesa; son, Oscar and wife, Esther of Brownfield, TX.; 7 grandchildren, and 13 great-grandchildren; several relatives and friends.

The family of ALFREDO CASTANEDA created this Life Tributes page to make it easy to share your memories.

Send flowers to the CASTANEDA family.