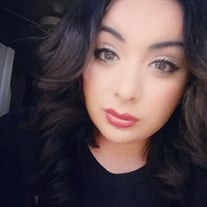 A Catholic funeral service Mass will be celebrated for Alexis Ayala, age 19, of Lamesa, Texas at 2:00 p.m. on Monday, December 1, 2014 at St. Margaret Mary Catholic Church with Father Joseph Kurumbel officiating. Interment will follow to Dawson County Cemetery. Funeral arrangements are under the care and direction of Gonzales Funeral Home of Lamesa, Texas. Viewing will be held on Saturday and Sunday from 9:00 a.m. until 9:00 p.m. at Gonzales Funeral Home Chapel. Rosary will be recited at 7:00 p.m. on Saturday and Sunday nights at Gonzales Funeral Home Chapel. Alexis died on Monday, November 24, 2014 in Lamesa. She was born on January 14, 1995 in Lamesa. Alexis graduated from Lamesa High School in May 2014. While in high school, Alexis was a state-qualifier in power-lifting and threw the shot put for two years. Alexis was a one-act play member, took art classes for two years and was a member of Family, Career and Community Leaders of America. She was a Spanish Club member and president of the STEM Club. Alexis took dual credit courses and received her Certified Nurses Aide license. She studied child development and cosmetology while she attended Lamesa High School. She currently was attending New Mexico Junior College. Alexis loved being with her family and friends and will always be remembered as a very loveable and happy person. Alexis never met a stranger. She will be dearly missed. She was preceded in death by her grandfather, Jesus Ayala Moreno. Alexis is survived by her loving family, her father, Salvador Ayala and her mother, Janie Vasquez of Lamesa, Texas; her brother, Alex Ayala of Lamesa, Texas; her sister, Ayla Ayala of Lamesa, Texas; her maternal grandparents, Juan and Lupe Vasquez of O'Donnell, Texas; her paternal grandmother, Maria Ayala of Lamesa, Texas; numerous loving aunts, uncles, cousins, friends.

The family of Alexis Ayala created this Life Tributes page to make it easy to share your memories.

A Catholic funeral service Mass will be celebrated for Alexis...

Send flowers to the Ayala family.