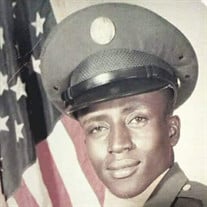 Funeral services for Albert Demerson, Jr. age 73 of Midland, Texas will be held at 11:00 a.m. Friday, January 18, 2019 at St. John's Missionary Baptist Church located at 103 S. 10th Street in Lamesa, Texas with Pastor Jermaine Klevland officiating. Burial with US Military funeral honors will follow to Dawson County Cemetery. Funeral arrangements are under the care and direction of Gonzales Funeral Home OF Lamesa, Texas. Viewing will be held on Thursday, January 17, 2019 at Gonzales Funeral Home. Albert passed away on Wendesday January 9, 2019 in Midland, Texas. He was born on June 14, 1945 in Lamesa. Albert married Shirley Rivers on May 23 ,1988 in Midland, Texas. Albert was preceded in death by wife, Shirley Demerson; his parents, Albert Demerson, Sr. and Willie B. Demerson; his daughter, Sharlet Demerson; his brothers, Jo Eddie Demerson and Kenneth Demerson; his sister, Shirley Coutee. Albert was a good patriot having served in the military forces of, the National Guard, US Army, and the US Air Force, all rendering Honorabel Discharge status. Albert enjoy fishing, gambling and fixing cars. He received the "keys to the city" for saving a woman's life in the late 1970's while working for Roger's Ford Automotive. Albert was a retired automotive mechanic. Albert leaves to cherish his memory, sons, Albert Demerson III, Percy Demerson, and David Demerson, all of Fort Worth, Texas; daughters, Tonya Brown of Fort Worth, Texas, Shericka Strambler, Theresa Wilson, and Dee Rivers, all of Midland, Texas, Felecia Demerson of Tampa, FL., and Karen Davis of Dallas, Texas; his sisters, Jacqueline Riptoe, and Alberta Linster, both of Midland, Texas; a host of grandchildren, great-grandchildren, relatives, and friends. After the funeral service please join the Demerson family for a meal back at the church.

The family of ALBERT DEMERSON JR. created this Life Tributes page to make it easy to share your memories.

Send flowers to the DEMERSON family.