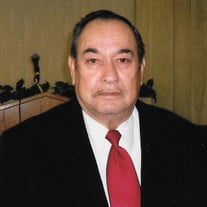 Chapel funeral services for Abel Rodriguez, Sr. age 83 of Lamesa, TX. will be held at 10:00 a.m. on Tuesday November 3, 2020 at Gonzales Funeral Home Chapel with Abel Hernandez officiating. Burial committal will follow to the Dawson County Cemetery. Funeral arrangements are under the care and direction of Gonzales Funeral Home. Facial masks are required at the funeral home. Due to the current area Covid-19 situation we continue to practice public safety measures. Viewing and visitation will be held at Gonzales Funeral Home on Monday November 2, 2020 from 10:00 a.m. until 9:00 p.m. Abel passed away on Saturday October 31, 2020 at his residence in Lamesa, TX. He was born on February 28, 1937 in Seguin, TX. Abel married Adelita Robles on November 5, 1968 in Lamesa, TX. He was preceded in death by his great-great-grand daughter; both parents; all of his brothers; and his sister. Abel worked as a farmer for the Bennett Brothers for many years. He later worked for the City of Lamesa where he later retired. Abel enjoyed playing music for the church. He ministered and preached for the prison for over 15 years. Abel loved spending time with his family. Abel is survived by his wife, Adelita Rodriguez of Lamesa, TX.; his sons, Abel Rodriguez, Jr. and daughter-in-law, Ida Rodriguez, Frank Rodriguez and daughter-in-law, Emily Hernandez, Johnny Rodriguez and daughter-in-law, Diane Rodriguez, all of Lamesa, TX., Jordan Rodriguez and his girlfriend, Devine Cantu of Big Spring, TX., and Richard Jameson of Katy, TX.; his daughter, Alice Ramirez of Hobbs, NM; 25 grandchildren, 40 great-grandchildren, and 2 great-great-grandchildren; numerous relatives and friends.

The family of ABEL RODRIGUEZ SR. created this Life Tributes page to make it easy to share your memories.

Send flowers to the RODRIGUEZ family.